Tech Support at Two in the Morning 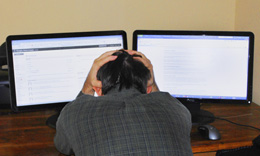 2014 Update: Crossloop bit the dust a few months back. It’s a real shame. I wish I could afford Teamviewer, as it works quite well. My current volume of remote work just doesn’t justify Teamviewer’s prices. Instead, I am paying for a Zoho Assist account now.

The client’s new Web site was due to launch the next morning…but it just wasn’t working right. It was already 2 am and I was too tired to think straight….

A few months before I had written a recommendation on this blog for using Crossloop. I have used this screen sharing program many times to help friends and family with computer problems. In the intervening months, a new service had grown up around Crossloop. A large network of individuals now offer tech support for hire using Crossloop. So, at 2 am, I went to the Crossloop site (NOW OBSOLETE) and found an individual who could help me with the Web site program that was giving me fits. He charged $40 per hour. That was more than most of the helpers, but I chose him because he had an excellent track record. I don’t even know where he lives. He’s either a night owl, or he lives in another time zone! At 2 am, he began sharing my screen remotely, trying to fix my problem.

For close to an hour, I watched as the assistant controlled my computer. He went through many of the diagnostics and steps that I had already attempted. That was comforting, but seemed futile. Finally, he asked me to restart my computer. He had just made a change that cleared up the problem! I gladly paid my $40 and shut down for the night. When my client opened her Internet browser the next morning, there was her shiny new Web site, just as I had promised!

If you are having computer problems, but are still able to connect to the Internet, you may want to give the helpers at Crossloop a try. It could sure beat hauling your computer down to the shop for some techie of unknown skills to tinker with it for several days!