Setting Up a Remote Office (In a Third-World Country)

When my boss in Dallas, Texas decided to take advantage of an alternative cancer treatment in Guatemala, I got to go down with him on his first visit. My two jobs were to translate and to set up his remote office. While the Guatemalans may still be laughing at my Spanish, I think they’d be impressed with the remote office — I sure was. We had a great team back home helping to plan and implement the setup and helpful hosts in Guatemala.

Essential Ingredient: High-Speed Internet
The apartment/office in Guatemala receives Internet service from the wireless router in the apartment owners’ home. Before going down, we had them bump their service up from 512kbps to 1Mbps. Tests revealed that it was indeed operating at 880kbps–not blazingly fast, but adequate for our purposes.

The Equipment
Most of the equipment for the office can be seen in this photo: 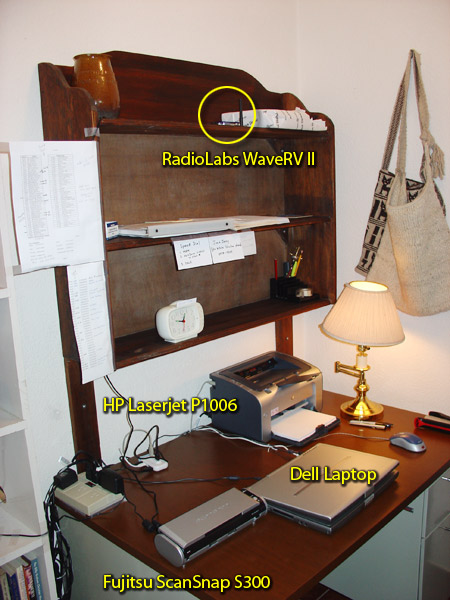 Setting up a remote office

Kinks and Solutions
Our first kink was getting the equipment into the country. At the Guatemala airport, the customs agents informed us that we’d have to pay import taxes on the scanner and printer. Since we did not have the sales receipts for this new equipment, an agent looked them up on the Internet and assigned a purchase price to them. I kept wishing he’d look them up at my favorite supplier: Newegg!

We had the laptop’s Outlook Express configured with IMAP, so that my boss’s email in Guatemala would mirror the email on his office computer back home. That worked well. But we assumed I’d be able to use the apartment owners’ SMTP settings for outgoing email. On arriving in Guatemala, I discovered that they were using an Exchange Server. When we checked with their ISP (Turbonett), we learned that they had not provided an SMTP server in Guatemala for the past four months! I guessed that most customers must be using a Webmail solution, like Gmail. Therein lay our solution. I set up a Gmail account for my boss and set his Thunderbird email account to use Gmail’s SMTP server for its outgoing email.

The next kink was in our use of Vonage. Our original plan was to connect the Vonage base unit directly to the host family’s router. The Vonage package came with three wireless phone handsets which could be placed down in the office. Unfortunately, the signal from the base unit in the hosts’ home out to the office was weak. My boss often had to step out of the office and stand in the yard for clear phone reception. Now, the yard is beautiful, but this was pretty inconvenient, especially since it was the rainy season! Here’s how we solved this little problem: The laptop was receiving a strong wireless signal, thanks to the Radiolabs Wave RVII wireless receiver. This was impressive. Because of the layout of the apartment, the wireless signal was traveling 120 feet and passing through three to five steel-reinforced concrete block walls. I asked our IT specialist if there was some way for the Vonage base unit to be connected to the laptop instead of to the router. YES! He connected to the laptop remotely with Crossloop and configured the laptop to share its Internet connection via the unused Ethernet port. Unfortunately the Vonage base unit could only connect properly with a crossover cable, which I could not locate in Guatemala City. So the Dallas office had to “overnight” the cable down to me in Guatemala. Once that crossover cable was installed, the Vonage phone worked perfectly in the remote office.

No Fax? No Problem
One piece of equipment was a real standout: the Fujitsu SnapScan S300. My boss sends and receives faxes all day long. We had considered taking a compact fax machine, but settled on this little device instead. It has worked so well that it will soon take its place in my boss’s main office here in Dallas. He places an original in the feed slot, presses enter, and just a few seconds later there is a clean scan converted to a PDF and attached to an email ready to be sent. Like I said above, this little unit stole the show. You can view one of the official videos at the Fujitsu site [updated models only].

That’s the outgoing part of the fax replacement. How about incoming faxes? For this, we set up a routine in the Dallas office’s phone system (IP Office) where faxes sent to a special phone number are automatically converted to PDFs and emailed to my boss. Very clean solution…. This alternative to faxing is also potentially “green” if/when the PDFs can be read off the computer screen and not printed.